Blacksmiths have long fought to be defined seperately from Farriers (who do shoe horses!) and are a proud community of artists and craftspeople. I am proud to be the daughter and sister of two renowned blacksmiths.

My father, Hector Cole MBE  is a Silver medal holder of the Worshipful Company of Blacksmiths and a Livery man of the Company. To achieve this prestigious award, a broad knowledge of smithing skills is required, ranging from traditional smithing skills, design skills, knowledge of the blacksmith’s craft and its history and the use of modern techniques and equipment. The honour  of Livery man has recently also been awarded to my sister Melissa Cole. It was for this occassion that I was delighted to be invited to attend the Worshipful Company of Blacksmiths’ Awards Luncheon in London last month. The Worshipful company of Blacksmiths is one of the Livery Companies of the City of London, and  dates back  to the 1300’s.The Company is one of the few Livery Companies in London where the craft that bears its name is still a vibrant trade. The Company maintains strong links with the profession in a number of ways. Approximately 50% of the Company’s charitable spending is used in the direct support of young blacksmiths in education. The Company also sponsors an awards programme which recognises the work of blacksmiths. The Company participates in and supports a large number of County Shows each year at which the work of blacksmiths from all over the country is exhibited and judged.

Unfortunately the Blacksmiths Hall was destroyed in the Great Fire of London, but the Worshipful Company of Painters now allow the Blacksmith’s Company to use their beautiful Livery Hall near St Paul’s Cathedral for their official functions.

The general public has very little concept of the role of the blacksmith in today’s world, and the Worshipful Company has as part of it’s role the promotion of the blacksmith’s craft, it’s motto is : “By Hammer and Hand All Arts Do Stand”.

The magical qualities of the blacksmith’s forge have fascinated people throughout time, sparkling metal, the alchemic craft of taking the solid metal and molding it to shape with seemingly effortless touches of a hammer and the perception of the strong tough blacksmith labouring away over a flaming forge.

However, the macho image of blacksmithing has undertaken an upheaval over recent years. Women Blacksmiths are now recognised as some of the most talented exponents in the art and craft of blacksmithing. Melissa Cole FWCB was one of the first women blacksmiths to be awarded a prestigious Bronze medal from The Worshipful Company of Blacksmiths in 2007 for her forged iron work and dedication to blacksmithing in education projects.

At the recent awards ceremony two women blacksmiths were recognised for their work and received Diplomas of Merit from the Worshipful Company; Rebecca Knott creates predominantly domestic scale pieces, and says ” The quality is in the detail. It’s important that every piece is thought about. Even the underside of a piece of work. Just because you can see it doesn’t mean it doesn’t deserve the same respect. ”

Bex Simon AWCB describes herself as an “Artist/Blacksmith Designer/Maker inspired by nature, texture, contrast and the environment around us”. Having developed a range of cast iron homewares, Bex Simon also creates traditionally forged large scale domestic and public pieces.

Of course there were some outstanding male blacksmiths being recognised at the awards ceremony, they all show exemplary use of forging techniques and design skills. For example a Bronze medal was awarded to Neil Lossock FWCB who is renowned for his beautifully executed plant forms.

Also Simon Grant-Jones was awarded a Bronze medal for his work which follows a more traditional route. he makes beautifully crafted tools and implements for use by traditional craftspeople such as thatchers and woodcraftsmen.

It was a truly proud moment for me to see both of the blacksmiths in my family so  genuinely welcomed by the members of the Worshipful Company of Blacksmiths. I am especially pleased to realise just how much they are doing between them and the other forward thinking blacksmiths to educate about and promote this most magical profession.

I would encourage anyone embarking on a construction or renovation project to seriously consider putting a portion of their budget into commissioning a true artist blacksmith to contribute to their creation, a bespoke garden sculpture, railing, fence, gate or even door handle can bring a timeless personal element to your home and will always be a conversation piece amongst friends!

We are so proud to be the house-guest of the beautiful TOAD GALLERY 17 Langton St, London. SW10.

Please do pop in to see our sample books and a selection of Pink House products. 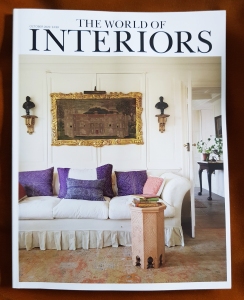 We are so proud to have our Femi design included amongst such beautifully crafted products in this embroidery history story by Dayle Wood and Sara Clarke in Veranda magazine! 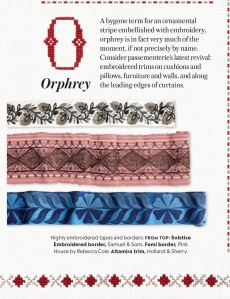